The number of homes and businesses using the National Broadband Network increased from 13,600 in June 2012 to 34,500 at the end of December 2012, according to year-end figures released today by NBN Co.

The figures encompass end users across the fibre, fixed-wireless and satellite services.

Fibre has now passed 46,100 premises in Brownfield areas and 26,300 lots/premises in Greenfield estates.

NBN Co CEO, Mike Quigley, said: “The results reflect progress in the early stages of the rollout, and are what we would expect given the time and work necessary to put in place the contracts and agreements needed to get to this point of execution.

“As can be seen by our targets, this rollout is not a linear progression, but a rapid ramp-up. We are targeting to pass more premises in the final quarter of the financial year than we will have passed in the entire project up to the beginning of that quarter. Additional construction resources will be added over the coming months to help achieve these targets.

The release of the six-monthly figures follows the announcement earlier this month that NBN Co had exceeded its Corporate Plan target for work commenced or completed in Brownfield fibre areas covering 758,000 homes and businesses by the end of 2012. Construction was commenced or completed for 784,600 premises by end December 2012.

Key metrics appear over the page.

^rounded up to the nearest '00 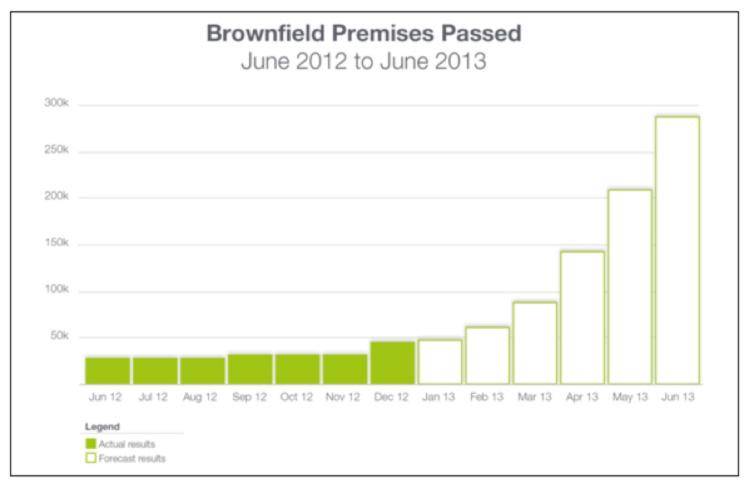