75 per cent of construction complete, progress on customer experience initiatives, 98 per cent increase in revenue

Summary of progress for the financial year ended 30 June 2018:

Sydney, 16 August 2018: NBN Co, the company building and operating Australia’s broadband access network, has increased its total revenue to $1.98 billion and reported solid improvement on its customer experience metrics during the 2018 financial year.

Together with retail service providers (RSPs), the company increased total activations by 65 per cent to reach four million at 30 June 2018, up from 2.4 million at the end of FY17.

This progress on activations, combined with a lift in ARPU to $44 in the first half of the financial year, helped the company nearly double total revenue to $1.98 billion for the 12 month period.

NBN Co management prioritised an extensive program of initiatives to enhance end-user customer experience during FY18 and saw significant improvements across all key focus areas, including more effective installations of nbn™ equipment and meeting agreed timeframes with RSPs for restoration of faults.

These initiatives included new wholesale discount options and optimisation programs for both the HFC and Fixed Wireless networks.

NBN Co CEO Bill Morrow said: “The 2018 fiscal year has been an important one for the company, as we’ve balanced our commitment to get the network built as quickly as possible with our priority to help improve the service for those connected.

“We listened to consumers and industry and put end-user customer experience at the heart of all management decision making. This resulted to some short-term delays in the build and activation schedule against our 2018-21 Corporate Plan, but we know the network is in better shape today than it was a year ago.

“It’s improvements in customer experience that define our success for the financial year and we’re seeing end-user satisfaction shift as a result.

“We’re demonstrating continued progress against our goal to complete the build by 2020. Today, we have 4.2 million activations on a network that is 75 per cent built and with 99 per cent of premises in design, construction or complete.”

Overall end-user satisfaction has increased by 12 per cent to reach 6.7 in July, representing end-users’ satisfaction with their entire broadband experience delivered by NBN Co and RSPs. For the factors within NBN Co’s control, the company demonstrated its commitment across key focus areas during FY18.

For end users connected (or ready to connect) to the network, NBN Co’s ‘Focus on 50’ promotion offered wholesale discount options to encourage RSPs to sell higher speed plans and reduce bandwidth congestion. This resulted in more than 45 per cent of end users on 50Mbps (download) wholesale speed plans or above in June 2018, compared to just 16 per cent a year earlier in June 2017 (this metric also includes 25-50Mbps (download) wholesale speed plans). Due to greater CVC provisioning by RSPs, average bandwidth congestion across the nbn™ access network (excluding Sky Muster) reduced from more than five hours per week per premise in June 2017 to 25 minutes per week per premise in June 2018.

The company enhanced the way it works with RSPs to connect end users to the nbn™ access network. In June 2018, NBN Co was completing 92 per cent of installations of nbn™ equipment in its control right the first time compared to 87 per cent a year earlier. In June 2018, 95 per cent of all orders were connected within agreed timeframes with RSPs compared to 92 per cent in June 2017 (excluding Priority Assistance connections and Accelerated Connections).

Today’s reporting of the company’s 2018 Annual Results coincides with the release of its July customer experience monthly progress report which shows further improvement across key areas. Today, 47 per cent of end users are on 50Mbps wholesale speed plans or above (this metric includes 25-50Mbps wholesale speed plans), 93 per cent of installations of nbn™ equipment in its control are completed right the first time and average bandwidth congestion across the nbn™ access network (excluding Sky Muster) is 28 minutes per week per premise, down from four hours and 52 minutes in July 2017. 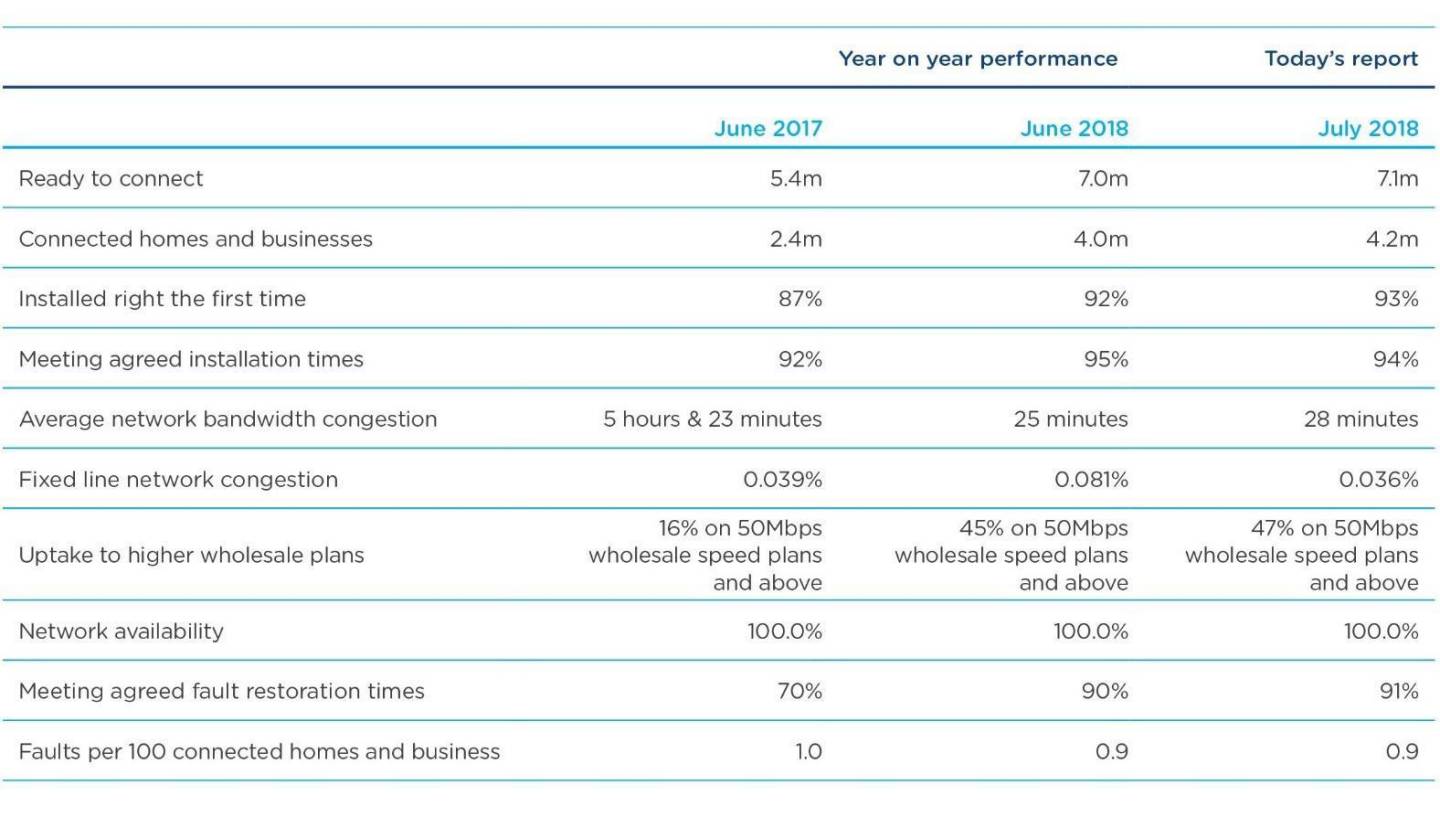