The tears that began to form in Shane Monk’s eyes had little to do with the smoke that wafted all around him.

As he performed a traditional Aboriginal smoking ceremony, serenaded by chirping birds and beneath a blazing sun, the “proud Taungurung man” was contemplating his connection with the land going back thousands of years.

“I get emotional when I start doing this sort of stuff, because it’s coming from here,” says Monk a short time later, touching his chest.

“So for me to actually be able to come out on site and perform these ceremonies, I get so emotional knowing that we are doing the right thing by our artefacts and our ancestors.”

Monk says what made this smoking ceremony so special was that it was part of a process of returning ancient First Peoples artefacts to the ground – artefacts that were discovered as part of the nbn™ access network rollout.

As a representative of the Taungurung community, Monk says it’s particularly important to his people that this is done with respect and in accordance with customs passed down from generation to generation for millennia.

From the moment the collection of stone artefacts was discovered near the Central Victorian town of Heathcote, a detailed process was kick-started, aimed at ensuring they were carefully removed, catalogued and stored until they could be reunited with the earth from whence they came.

More than a year after they were first discovered as part of the network rollout, recently, Monk was finally able to do just that.

With an excited light in his eyes, he explained the significance of the smoking ceremony and why it’s so important to rebury items that were in the hands of his ancestors as long ago as 60,000 years.

“This is a special ceremony for Taungurung people because the artefacts that we removed from the ground need to go back to where they came from.

“We would like the Taungurung to be the last people to touch the artefacts, and make sure they have been smoked and cleansed before they go back into the soil.” 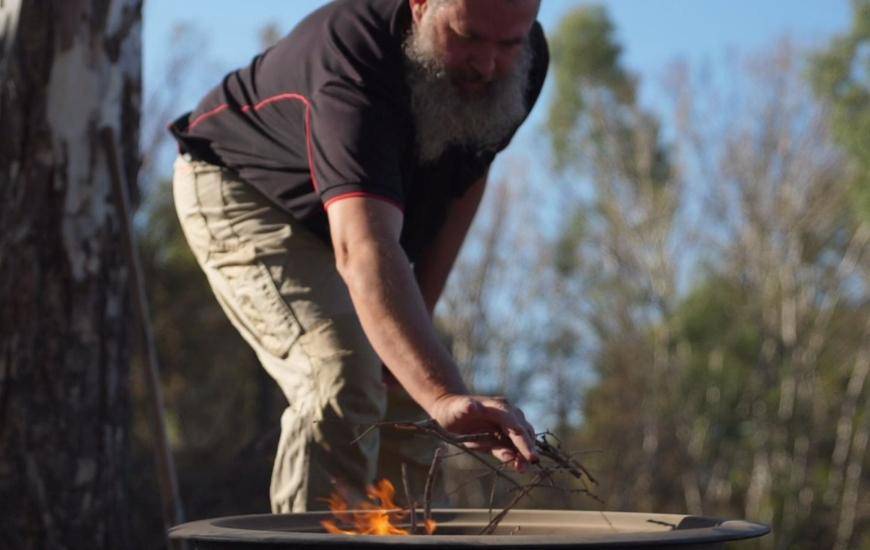 It’s not just the artefacts that are cleansed.

Monk also makes a point of bathing in the clean ‘white’ smoke himself before inviting the handful of onlookers to do the same.

“A smoking ceremony is a really important ceremony for the Taungurung people and was done every time we had a visitor come onto country.

“We always did a smoking ceremony to cleanse them of bad spirits, and open their mind and body up to take in good spirits.

“I use the smoke like a shower. I rub it over my arms and in my hair, and I cleanse myself properly.” 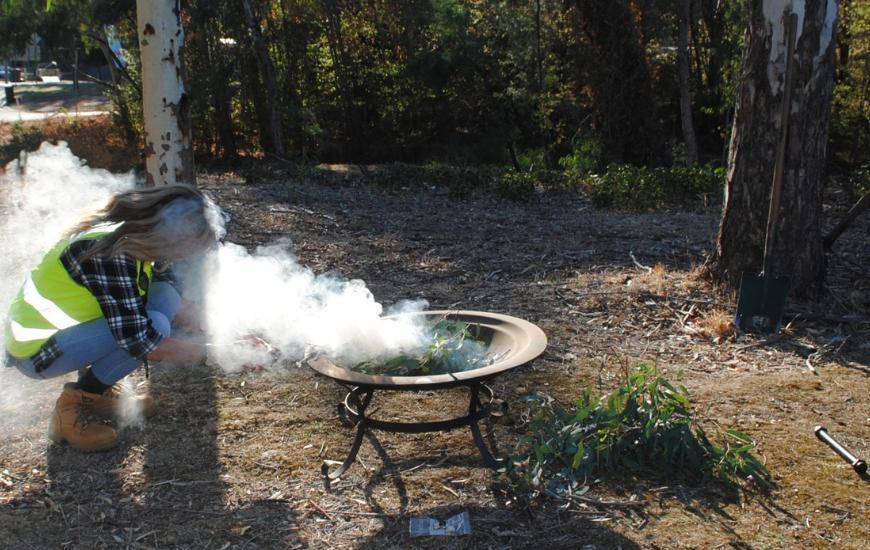 This occurred during the planning and design phase of the nbn™ access network rollout in the area, well before any construction work had begun.

Spread across four different sites, the 40 artefacts included flakes of rock broken on a cutting tool to form a sharp edge; ‘cores’ (a cutting tool made from the original larger, stronger rock); angular fragments; and two smaller cutting tools.

Says Paton, “The artefacts are initially identified by the Cultural Heritage Advisors and Registered Aboriginal Party (RAP) representative at the time they are found during the archaeological excavations.”

Once confirmed as an Aboriginal heritage artefact, they are carefully stored and analysed by the CHA as part of NBN Co’s CHMP. They are then either returned or reburied in accordance with the wishes of the RAP or other relevant Traditional Landowner group. 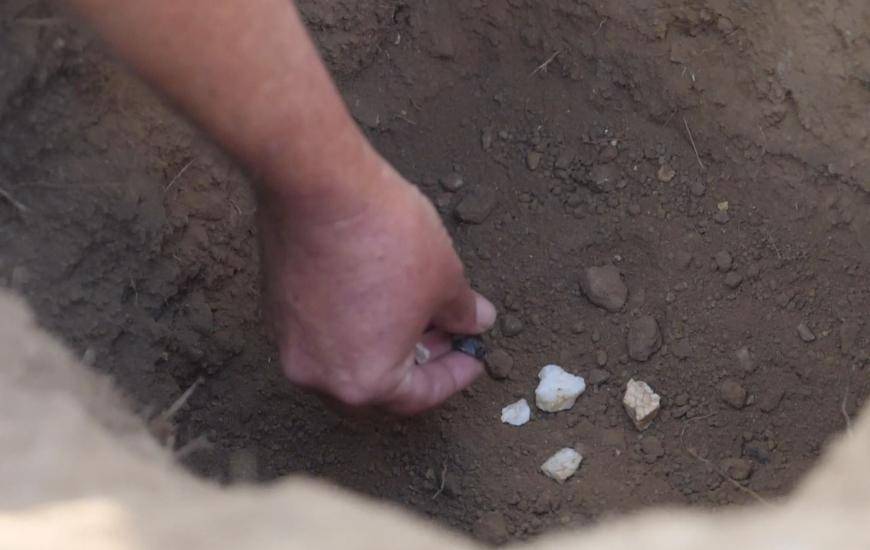 “Both the cultural sensitivity and scientific analysis have to be suitably managed to ensure the artefacts are treated with respect, due to their links to previous First Peoples land use, and correctly researched to meet historic scientific knowledge.”

NBN Co’s Regional Deployment Manager, Cory Keighery, acknowledges it can be a challenge to balance the needs of the business with the need to sensitively treat finds of cultural significance.

“It can be difficult, sometimes, to balance the requirements of the nbn™ access network rollout against the needs identified in the CHMP.

“It can add some time but it [the CHMP] does really assist in helping the communities accept the rollout as well, and acknowledge that we’re looking out for everyone’s interests in the build.”

The ceremony in Heathcote follows a similar event held recently in Bright, with plans for two more reburials in other parts of Victoria.

While the company has a well-honed process in place to handle such discoveries of cultural significance, Paton says it’s rare to conduct a reburial and traditional smoking ceremony as part of the nbn™ access network rollout.

“I would say that, in Victoria and Tasmania, the reburial of artefacts and an associated smoking ceremony has occurred no more than five times over the past seven years.

“This is because NBN Co primarily seeks to avoid ground-disturbing works, such as excavation, in areas of known or probable cultural heritage sensitivity.” 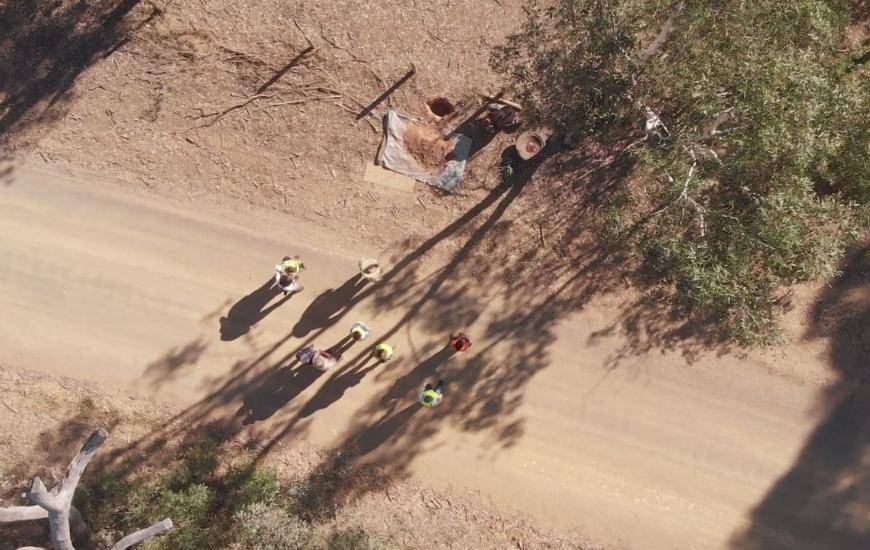 An aerial view of the ceremony

There has always been a good relationship, says Paton, when it comes to working with First Peoples representatives. The company identifies the risk of harm to Aboriginal heritage and follows the correct process to seek approval by working with the RAP or local Traditional Owner group.

“NBN Co and our Delivery Partners’ work to understand and protect Aboriginal heritage has been appreciated by the Victorian and Tasmanian First Peoples groups we have interacted with.”

Experience has shown, adds Paton, that First Peoples communities wish for access to improved internet just the same as other Australian communities, but also understand adhering to the CHMP requirements could impact the timing of those services.

Monk agrees: “The support that we have been getting from NBN Co over the sites has been great.

Discover how locals are embracing their new fast broadband infrastructure in cultural, beautiful and creative ways.