The nbn™ project | Published on 7 March 2019
Share on Twitter Share on Facebook Share on LinkedIn
As the nbn™ broadband access network progresses towards connecting the nation by 2020, a conversation has emerged about the affordability of broadband in Australia. But how do we accurately measure and compare broadband prices across countries when it is often bundled with TV, mobile and other services, while international costs of living differ?

Broadband affordability matters. The internet has become central to everything from banking to entertainment to schoolwork, and ensuring that all Australians have access to reliable, affordable broadband is critical to improving business and government services, and levelling the playing field for individuals from all socioeconomic backgrounds.

The good news is that AlphaBeta has found Australia’s broadband affordability to be among the best in the world. Our latest study analysed 4,578 broadband plans from 22 countries and found Australia to be the 7th most affordable market for broadband, based on the average price of broadband as a share of household income.

We also found that Australian telecommunications prices have fallen since 2000 due to a significant drop in prices in the last five years, as the rollout of the nbn gathered pace. Our findings suggest that Australia is on the right track to delivering universal, affordable broadband that will underpin our economic development and improve social and educational outcomes throughout the country.

Calculating the price of ‘naked’ broadband

While our study isn’t the first to compare international broadband prices, it aims to provide a more comprehensive view by analysing a far greater range of broadband plans than previous reports.

Telecommunications companies typically sell broadband access in bundles with telephony, premium TV, and other services. Almost two-thirds of broadband-connected households in Australia bundled their home phone and fixed broadband services in 2016. There are many different types of telecommunications bundles, which makes it difficult to determine the price of broadband for international comparison.

Previous studies have attempted to provide like-for-like comparisons by looking only at plans with similar features, and comparing these internationally. However, this method means that only a limited selection of plans can be studied.

Instead, we use a statistical modelling technique called regression to calculate the value of features and inclusions like TV channels, mobile data and commitment periods.

According to our analysis, the inclusion of 124 TV channels adds $17.38 to the monthly cost of a broadband bundle while the inclusion of 50GB of mobile data adds $11.20 to the bundle’s cost. By calculating and subtracting these costs from bundle prices, we were able to determine a “naked” broadband price for most plans in our dataset.

Of course, broadband is priced in the local currency of each country. These prices need to be assessed against a common metric for a fair comparison, for example by using foreign exchange rates to convert all prices to US Dollars.

But price is not the same as affordability. ‘Price’ is a measure of what consumers pay for a service. ‘Affordability’ accounts for their capacity to pay. A smartphone costing $1,000 globally is more affordable in France than in Indonesia, for example, as French households are richer. (France has a GDP per capita ten times that of Indonesia.)

To provide a true measure of affordability, AlphaBeta compared broadband prices to household income. This avoids what is known in economics as the Balassa-Samuelson effect, which is the tendency for consumer prices to be systematically higher in richer countries.

Australia has the 7th most affordable broadband of 22 countries, based on AlphaBeta’s affordability comparison. 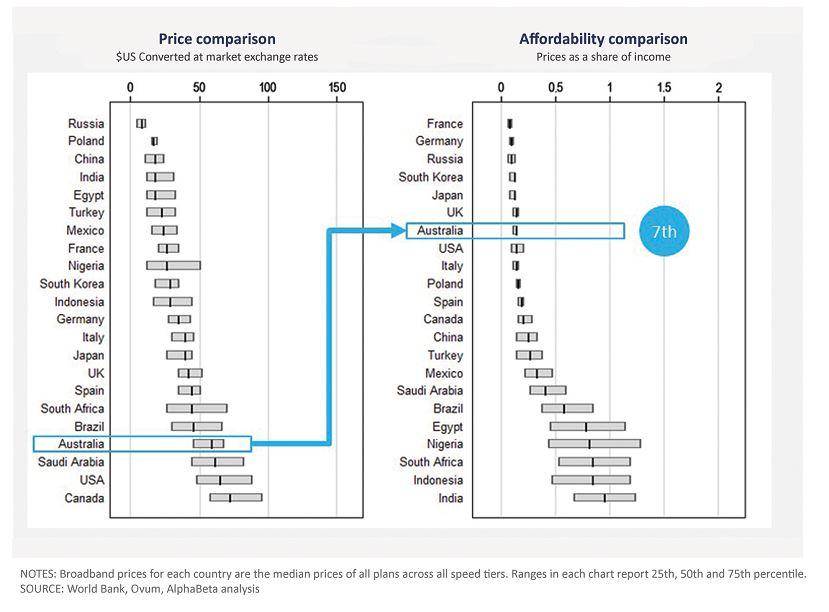 The median broadband price in Australia is equivalent to 1.4% of Australian per capita income, and broadband is relatively affordable in every speed tier: 0-25Mbps, 25-50Mbps, 50-100Mbps and 100+Mbps.

For comparison, the UN Broadband Commission currently defines broadband as affordable if an entry-level plan costs less than 2% of a nation’s per capita income.

Is broadband affordable in Australia?

Broadband is more affordable in Australia than elsewhere in the world, but is it affordable for Australians?

To assess this, we looked at the Australian Bureau of Statistics’ Consumer Price Index, which tracks various categories of prices in the country, including telecommunications (including broadband), electricity, food, housing and healthcare costs.

Since 2000, Australia’s CPI – which is a measure of the cost of living – has risen 63%, while telecommunications prices fell 6%. This was mostly due to a steep fall in telecommunications prices in the last 5 years. Meanwhile, since 2000, the price of electricity has more than tripled, the price of health has increased 134%, rent is up 79% and the cost of food has increased 63%.

Our findings indicate that Australian broadband is affordable relative to other goods and services, and is becoming even more so as telecommunications prices fall.