Coffee, cake and connectivity: Café thriving on the Cloud

Access to relevant technology and reliable connectivity means one business owner can no longer complain that they’re time poor.

It’s like a joke question: What happens when you ask a futurist to change a lightbulb?

Answer: They reinvent the way it casts light.

Which is not a joke at all. It’s true. That’s what a good futurist will do.

So when Nik Ichalkaranje’s friend asked him to be a partner and run his café in Torrensville (SA) for a while, he shouldn’t have been surprised to find that within a few weeks, the business and staff had been totally reorganised and were operating in the Cloud.

And that may sound a little “out there”, but think about this for a minute - Café Modinetti still produces excellent food and beverages, but now it takes longer to load the dishwasher than it does to do the accounts, order supplies, roster the staff and market the business.

This is one business owner that can no longer complain they’re time poor!

Throughout the day, Nik can monitor in real time how many coffees and cakes have been sold, therefore how much milk has been used, the quantity of flour, sugar and eggs he needs to re-order and which staff members are working, when they’re on a break, and how many hours he owes them.

“I looked at the old management system and applied the general principals of what a futurist would consider – what’s possible, probable, preferable and plausible,” Nik said.

“In other words, I wanted to take out the hard things about doing business by using relevant technology.

“I developed a mechanism that enabled me to manage the café from anywhere – so the chefs and staff were free to get on and do what they do best.”

The new multi-app model allows Nik to easily see what sells best at which time in the day.

So by assessing the analytics at the end of every day, week or month, he targets his free social media marketing by addressing the pattern of sales.

The only hardware required is a few tablet devices loaded with fully-integrated business apps that talk to each other in the Cloud.

Nik has an ipad device on the front counter for sales, another attached to the wall as a “kiosk” for staff rostering and another mobile device for data collection and account processing.

It’s a paperless system. Even incoming invoices are scanned by an app that automatically integrates them into accounts payable.

“Dr Nik”, as he’s affectionately known to friends and colleagues, may be a futurist with a PhD in Artificial Intelligence but his real value lies in his endless optimism, creativity and ability to think laterally about pretty much everything.

When he was asked to help run the café, his lightbulb moment occurred when he realised he could manage the business in minimal time from anywhere.

He imagined a whole-of-business online tool that could virtually run the café for him.

He then developed it into a model he calls "Shop in a Box” that can be applied to any small retail or service business.

So sure was he of his model, he bought into the café!

Shop in a box

And when the electrician next door asked Dr Nik for help, it took him just two hours to “box” his business into the Cloud.

The electrician now concentrates on plying his trade rather than being consumed for hours by payroll, scheduling and accounts.

And thus, Dr Nik’s new digital toolbox, coupled with sound marketing advice, has given these two small businesses in Thebarton (and a few others he advises) a leading edge on their competitors. 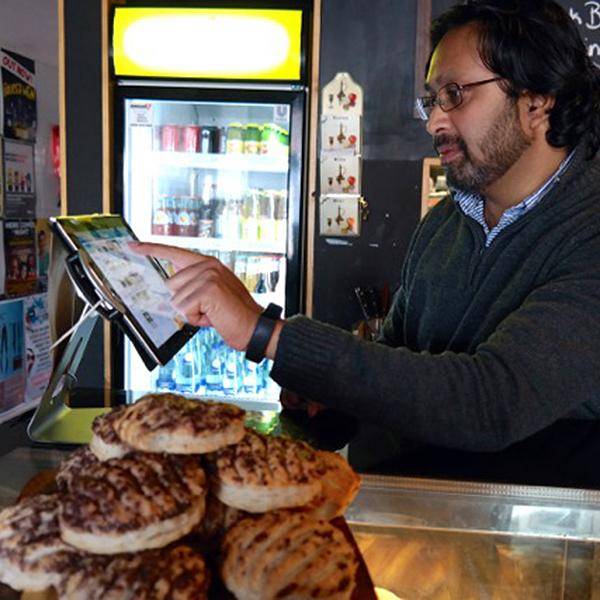 Last month, Pricewaterhouse Coopers, in a report commissioned by Google, estimated that Australian small to medium enterprises were leaving “close to $50 billion” of economic value on the table by failing to fully exploit technological solutions at their disposal.

It’s a point well understood by Dr Nik who has worked for the Federal Department of Communications as a senior technology adviser and more recently, as a Strategist with the State Government.

“People believe they have to be tech-savvy and connected to the nbn™ network to work to this extent on Cloud-based services. But they don’t,” he said.

“I can ‘Shop in a Box’ any business in less than half a day. Connecting to the nbn™ network in the future means businesses will be capable of doing it  in new, fast and creative ways.

“We’d love to offer free wifi services to our café customers, which will happen when we connect to the nbn™ network and at that point we’ll be able to do so much more in responding to customer preferences and tastes.

“But for the moment, there is enough technology available to free up the time and mobility of business managers so they can either concentrate more on the essence of their business, or do other things like spend time with the family.

“With the nbn™ network, more innovations and ideas will flow as a natural consequence of its sheer speed and capacity, but operators should be getting familiar with and using new technologies now to realise what’s possible and plausible in the future.

“What I do is help people create a vision and then I give them the tools to deliver it.

“That’s what keeps me smiling. There are so many great ideas still to be realised, so many new ways of working still to be created. It’s very exciting.”